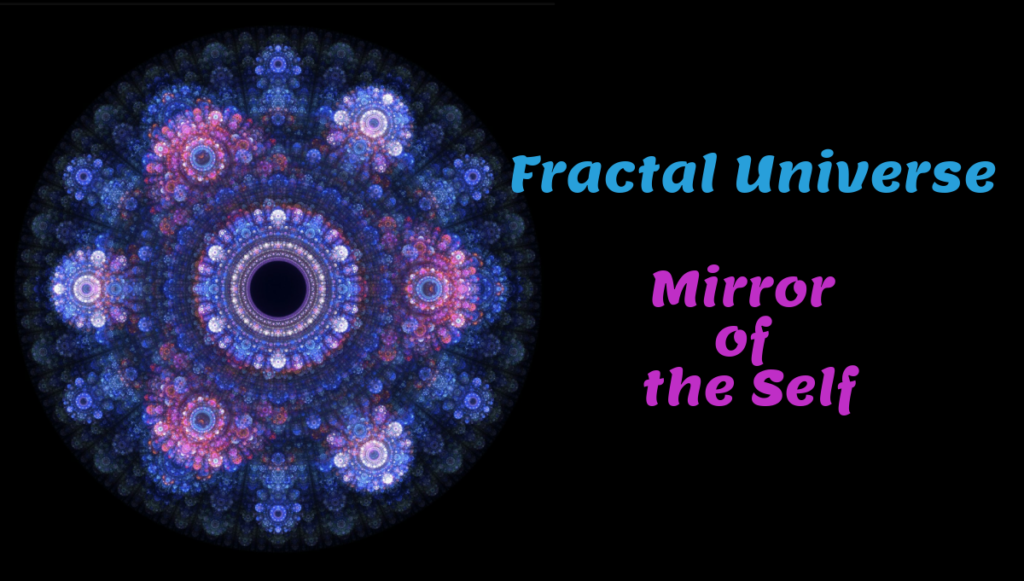 Fractal Universe- Mirror of the Self

The universe is a fractal- a structure in which each part has the same character as the whole.  Therefore every part of the universe and every moment in time, from the smallest scale to the largest, portraits the same character as the infinite whole.  This means that all of creation, from the big bang to infinity and everything in between is represented in a single atom, a blade of grass, a human being, and the largest galaxy, played out in a faction of a second and over many millennia.  While it is true that the that the universe erupted with the Big Bang over 13 billion years ago, cooling into matter within seconds, forming stars, and eventually the earth over 4 billion years ago, giving rise to life 3.5 billion years ago and evolving into Mankind 500 thousand years ago,the complete unfolding of the universe, from the Big Bang, to the life and death of stars, the spiraling of galaxies and the waxing and waning of the moon is manifest in every river and mountain, every life, every breath.

The purpose of existence is to discover the Self in the looking glass of the universe and to differentiate yourself and express yourself openly and authentically, reflecting the Self back to the universe.  Every experience and relationship is an opportunity for Self discovery.  Those experiences that are perceived as wrong, evil ugly or bad offer the greatest opportunity for growth. Often the things that are perceived as bad or evil are reflecting an exaggerated aspect of the Self that is being denied or suppressed, expressing in the darkness of the subconscious shadow.  Through compassion and empathy the aspects of the shadow Self can be integrated with waking consciousness and expressed more fully and openly, better serving the individual.  A challenging but helpful practice is to search for people or things that elicit a derogatory response, such as the existence of cancer, or war, and bring compassion and empathy to those aspects of creation, searching for those aspects in your Self and integrating them into your waking identity.

Though it is helpful to understand that all things in existence are an expression of the essential Self, this understanding does not conflict with the ability to be in opposition to things.  For example, it is possible to bring love, empathy and compassion to a bear that is trying to eat you or a fish that will not bite your line, understanding that like you they are both trying to live and thrive in their present form.  However, it is the purpose of our existence to differentiate our self from the other, therefore, killing the bear and eating the fish. By Differentiating the Self in this way, serves not only the individual but the bear the fish and the entire universe, offering a differentiated existence through which to perceive the Self. However, it is important to understand that I and the universe are also served should the enemy prevail, the bear or the fish, offering still an opportunity for Self discovery. Through this understanding one enters a state of all encompassing, universal love and infinite beauty.

Though everything is a complete manifestation of the whole of creation, at the same time everything is a part of a universal consciousness, one infinite and eternal cosmic body.  Also, this body is represented on every level of existence.  For example, making up a single individual human being are many different cells, heart cells, blood cells antibodies, brain cells and even fungi and bacteria cells. Some of these cells are in conflict for survival, competing for food in the gut. However, through the differentiation of each of these cells, expressing themselves and playing their specific role the human body is able to live and eventually die as it does.  This is also true for life as a whole, all plants and animals, some in conflict, some in cooperation, all playing a specific role in the body of life on earth.